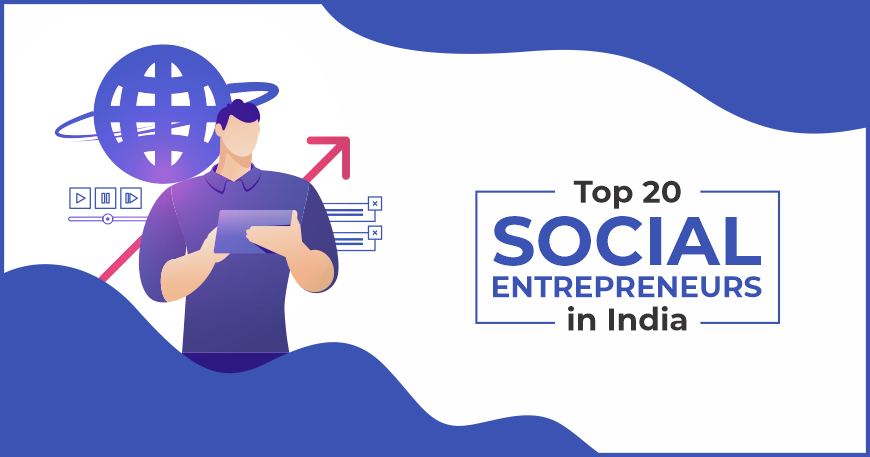 Standing on the threshold of 2020, we can easily say that the entrepreneurial ecosystem in India has come a long way since its inception.

Nine to five job concept has become old school as most the generation has been after something ‘new’ on their own. It’s indeed a matter of pride for us that the Indian start-up industry is the third most comprehensive and fastest-growing in the world.

The ideology of ‘starting something new’ has hit the pre-set concepts of society.

In this article, we would share the entrepreneurial journey of the top 20 successful social entrepreneurs in India. Take a look –

She is the Founder and Managing Director of Child and Youth Finance International (CYFI). Apart from that, Jeroo is the founder of multiple award-winning national and internationally acclaimed NGOs. She owns global fame for all her humanitarian work esp. children. Presently, CYFI has been working with 91 world governments to fulfill the objective financial extension and economic citizenship education in the Sustainable Development Goals of the United Nations. Her latest ventures include Aflatoun, Childline India Foundation, and Child Helpline International.

Harish Hande is an accomplished social entrepreneur and founder, co-owner of SELCO. By far SELCO has installed 120,000 systems in Karnataka and it has been dedicatedly working on sending solar energy across rural parts of India. Harish was the recipient of the prestigious “Ramon Magsaysay Award” in 2011.

Before establishing Changemakers in 1992, Ghosh had etched her name on the panel of A-listed journalists in India. Changemakers is an online open-source, self-energizing, problem-solving platform. Ghosh served as President of Ashoka from 2000 to 2005 and associated with many renowned national and international NGOs.

Ria Sharma is a new-age Delhite who is graduated from Leeds College of Art, UK. She founded the world’s first rehab for acid attack survivors. Ria is the founder of ‘Make Love Not Scars’ NGO which was initially a crowd-funded venture and teamed up on social media platforms in 2016. Ria was the British Council’s Social Impact Awardee in 2016. Sharma was awarded as the ‘India Today Woman of the Year’ for Public Service and as the ‘Brand of The Year’ by CNBC TV18 in 2017.

Sanjit Roy is on a mission to change the concept of poverty and inequity. With this noble purpose, he formed an NGO Social Works and Research Centre (SWRC). This NGO looks after property alleviation across rural areas of the nation. Pure drinking water has been always a persistent crisis. Roy addressed the water problem by training villagers to set up water pumps and their maintenance. In 2013, Roy was felicitated by TIME magazine as one of the world’s top 100 most influential people for his effort in making 3 million villagers.

This social entrepreneur college dropout is the founder, owner of Socialblood.org. The social networking site came in the frame through popularizing an article stating how a family had been then struggling to find blood for transfusion for their four-year-old daughter. The organization helps people collecting blood through Facebook.

In 2011, he was crowned with the Staples Youth Social Youth Entrepreneur award and had been featured in 30 under 30 innovators in 2015.

Much before a social entrepreneur Hanumappa Sudarshan is a popular tribal rights activist. He has been felicitated with Padma Shri and the Right Livelihood Awards for his untiring pursuit of helping an underprivileged section of society.

In 1980 he founded Vivekananda Girijana Kalyana Kendra for cohesive health care service of the below poverty level tribal population in the Chamarajanagar district of Karnataka. Sudarshan also graces the positions of Honorary Secretary and Founder of the Karuna Trust which works for the rural development across Karnataka and Arunachal Pradesh.

The idea was to provide skill development training to the youths of the lower-middle-class segment of the country and increase their employability. His institute named the Institute for Quality skill training trains poor sections of the society.

One of the finest advocates in our time Chetna has been a strong voice for women empowerment. She is the President and Founder of the Mann Deshi Foundation. The aim of the organization is to create 1 million rural women entrepreneurs by 2020 by the means of skill training and grooming.

Dr. Kurien is popularly known as the ‘Father of the white revolution in India’. He was the only social entrepreneur in India, whose monumental ideas like the “Billion-litre idea”, “Operation Flood” have transformed India from a milk-importing nation to one of the largest producers of milk in the world.

The Executive Vice Chairman of the National Innovation Foundation, one of the prominent national scholars Anil has been a professor of IIM (Ahmedabad) since 1981. Later on, he started his own organization Honey Bee Network. The company helps rural inventions to get the spotlight through commercialization.

The founder and CEO of Avishkaar Venture Management Service Rai is precisely known as the critical man in the word of the social entrepreneurial ecosystem in India. With some ground-breaking initiatives and agricultural ventures to push the entrepreneurial growth journey of India Avishkaar is exactly doing what it needs to be done to bolster the start-up industry of India.

Study Hall Educational Foundation (SHEF) is founded by the lady social entrepreneur who had been felicitated with the prestigious Social Entrepreneur of the Year India 2017 Award. Sahni is known for her contribution in the field of education for the specially enabled girl child. SHELF has trained over 5000 trainers and changed the lives of countless girls across the country.

Prof. Trilochan Sastry was the Dean of IIM (Bengaluru). He founded the Centre for Collective Development and Farmveda. These two social ventures establish cooperatives and market branded food products. All the profit earned from these ventures collectively goes to the development of Indian farmers. CCD has been operational since 2004 and by far it has organized over 25000 farmers attributing the marketing and value addition.

He gained mass attention with the PIL filing which later developed into a judgment that inducing politicians to admit their wrongs. It was his consistent effort that led to the formation of ADR (Associations for Democratic Reform) accountable for inspecting the elections procedure every 5 years. Now politicians are more aware of democratic operations and the Fundamental Rights stated by the constitution of India.

Nivesh is presently one of the famous entrepreneurs in India. He introduced a program named Leadership 30. The program motivates students to become leaders. His other initiative called Step Up for Healthy India looks after offering essential health care and sanitization to the poor people.

This prominent social entrepreneur of India is famous for his NGO ‘Goonj” in 1999. The NGO volunteers collect used clothing from households and distribute them to the underprivileged. The NGO played an active role during massive calamities in India like Tamil Nadu, Kerala, and Gujarat. Anshu was felicitated with Ashoka Fellowship and 2015 Ramon Magsaysay Award in 2004.

This young social entrepreneur of India is popular for her foundation Robin Hood Army. Batra along with her three other friends started this volunteer-based organization that does its best to send surplus food to the unfed people. By far it has catered to 5 million poor people in 60 cities across the globe.

Social Entrepreneurs in India have become the backbone of society for their unique initiatives. They don’t work for money rather they strive to add value to society. Not only social welfare they aim at improving the lives of the masses of the country.

How to Grow Your Career & Business? Join Our Free Session to Know More